Brian Mooney was on Today with Sean O'Rourke on RTE Radio.

I don't know Brian. I've never met him. I have read his column in the Irish Times in the past and on a rare occasion I might disagree with some of his advice, although I can't recall a specific time. Brian also contributes regularly on RTE.

Brian has been a member of the ASTI for forty years and he wrote that he had decided to resign his membership. He was speaking with Sean about his reasons.

Brian is entitled to his opinion like anyone else. And he is entitled to publicise it wherever he likes. And even if I disagree with what he had say, I would insist that he feel free to make his point and would defend his right to do so.

Of course, this is predicated on solid reasoning otherwise one risks embarrassing oneself.

Let's get some things out of the way first.

"What in the world would you most like to change?

The inevitable loss of social solidarity that emanates from growing wealth and prosperity, and its tendency to blind us to our true potential to be enriched by giving of ourselves."

So, all the more pity now that he has decided to abandon solidarity with the overwhelmingly expressed democratic wish of the ASTI membership.

What did he say and why is he wrong?

Brian's comments are fallacious. They are the product on skewed reasoning that suggests the government power over individuals should trump individual rights.

He began by saying that we have to look at the timeline of how we got here.

This is all well and good, except it does not take away from the fact that the government broke its promise and has not paid ASTI members for work they have done. The dispute can only be solved by looking forward.

Brian agreed that the government reneged on their agreement but said this was because we withdrew form the 33 Croke Park Hours.

Brian doesn't seem to understand how contracts work. Our agreement to do the Croke Park Hours ran out in June 2016 when we fulfilled ALL the requirements of the Haddington Road Agreement. The issue of how the hours are used is secondary to the fact the agreement was fulfilled. S&S was only stopped at the October Mid-Term Break just gone.

Brian then referred to the TUI and INTO agreement saying that they had negotiated a deal with the government. When Sean O'Rourke highlighted the fact the HRA had run out, Brain hesitated, and then conceded ("well, that specific agreement ran out" - seriously Brian!). Then he said he didn't want to be a spokesperson for the government but proceeded to be anyway.

He referred to the fact that there were 280,000 hours being done in other areas of the public service and if the ASTI are allowed to renege on doing their 33, then why should any other public servant do them?

This is interesting semantics. The ASTI did not *renege* on the 33 hours. We fulfilled our agreement and our promise to do the 33 hours as contained in the HRA. The only reneging that went on was the government not keeping its promise to pay us.

Brian said our decision makes it impossible for the government to enable to us to have the payment for S&S because to do so would enable us to walk away while others had to do them.

Seriously Brian! After 40 years teaching! We did the S&S work FREE for 3 years. We were supposed to get a small payment this year. The money has already been budgeted. It is there. The government is using the 33 Croke Park hours as a distraction. The fact is they are refusing to pay us for a previous agreement because we won't be good little boys and girls and sign their Lansdowne Road Agreement.

Imagine you were contracted to write an article for the Irish Times and when you went to get paid for it, the Editor asked you to do it free for three years. And he asked you also to do some podcasts for the Irish Times for free, but in 3 years, he will give you a small payment. And you agree. And at the end of the 3 years, you went to get your payment, but he said he will only pay you if you agree to do whatever he asks you to do in the future. How would you feel?

And that is ignoring the fallacy that just because one group of people are doing something, so should we, just because.

I can only explain it to you Brian; I can't understand it for you.

Then Brian embarrassed himself further by presenting a false dichotomy - saying that the choice was between the government giving in or the ASTI giving in.

Seriously, after 40 years teaching! The problem with this thinking is that this is not the only choice and it is this kind of narrow, positional thinking that makes finding a solution impossible. Negotiations need not be a zero sum gain; they need not be win-lose, they can be win-win.

When quizzed about the massive support for action, Brian tried to spin it that *effectively* teachers are stupid people who will do whatever their union tells them - who cannot inform themselves of the issues - and instead of highlighting that 80% supported the union, he chose to highlight that 20% didn't.

He went on to say that the only option was for the government to unravel the current agreement.

But Brian has not been reading his Irish Times. If he did, he would know that the LRA is dead in the water and will have to be re-negotiated, probably starting this week.

Brian's take seems to be that the union is wrong but his reasoning is flawed and simply ignores the fact that had the government kept its promise and paid us for work we have already done, NO SCHOOL WOULD BE CLOSED.

Had the government honoured the HRA agreement, then we would have had no choice but to negotiate ourselves into the LRA. By not paying us for the S&S as promised, the government gave the ASTI a solid reason to withdraw from S&S. It is the government stupidity that has resulted in schools closing. And they knew about this for the last year!

Brian seems to think the fundamental issue is the 33 Croke Park Hours. But all he is doing here is peddling the government line and missing the bigger picture.

So Brian, have a good retirement. At least from the classroom. I'm sure your media work will keep you busy.

If I am being unfair here, or if I have not represented what I heard correctly, please wade in below in the comment section. 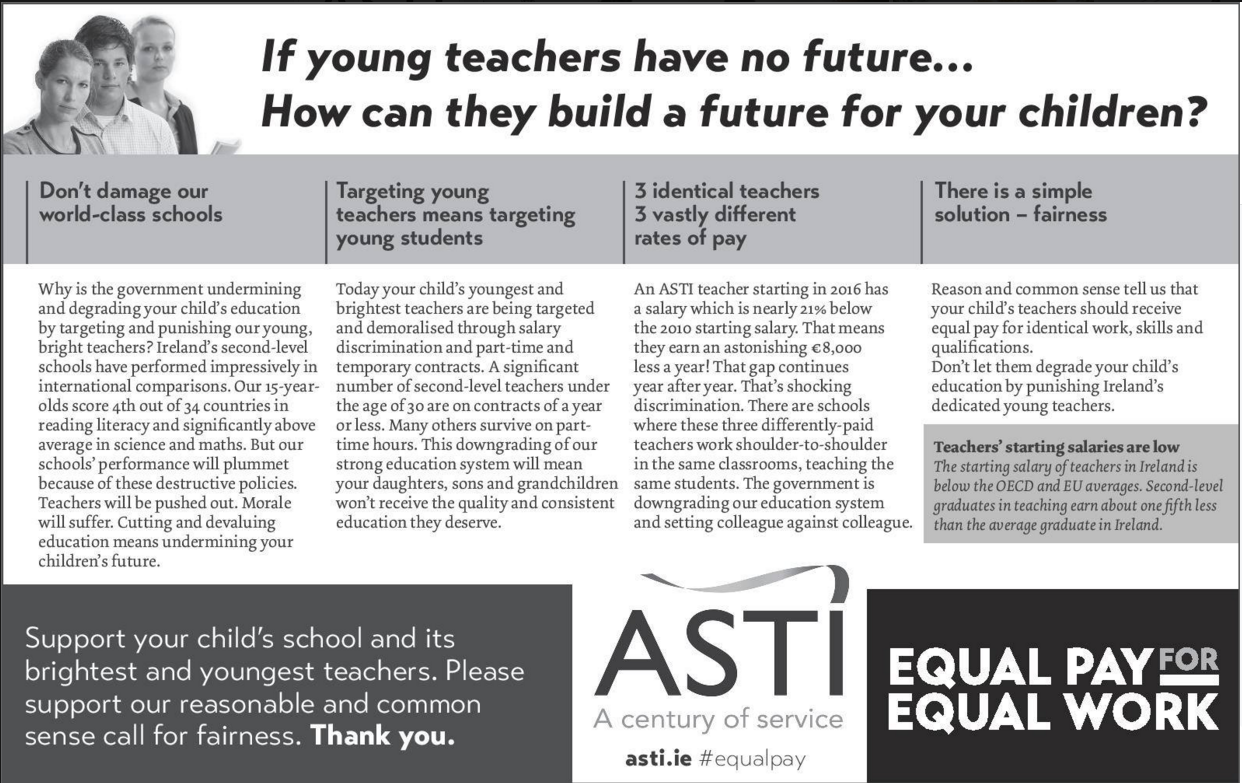 One thought on “What Brian Did.”