Home » Blog » Education » If You Take Off Your Earphones, You’ll Hear The DES Laughing At You.

In any dispute between two or more parties, where they decide to engage in negotiations, there is always a portion of blame on both sides. If one side was blameless, if they had ‘clean hands’, there would be a court case, not negotiations.

So in negotiations, both sides have a degree of fault. This is the gap between them. The purpose of negotiations is to narrow or remove this gap, ideally without creating new or additional problems. One way to reduce the gap is to split the initial problem up into smaller issues and deal with them one by one. But ultimately, a negotiator would not sign-off any smaller issues individually without an agreement on all issues, that is, the agreement is on the whole package or there is no agreement. Consequently, where there is more than one issue to resolve, the stakes are higher.

In an ideal scenario, the gap would be closed and each party would get a bit of what they wanted. Obviously, each would have to compromise to get something. But a WIN-WIN outcome is the most desireable outcome. Except….

Negotiators have to be keenly aware of the optics and of their own position. Besides the fact that human nature means it feels good to stick it to the other guy, the negotiator’s boss wants them to be tough and to win more. And they can’t be seen to ‘give in’ to the other side because both their boss and the media will roll over them. A Win-Lose is ideal for them, even if only in the short run. And it is always the short run because Win-Lose scenarios always come back to bite, and not always in the obvious way you are thinking right now. A Lose-Win is terminal. Winning at all costs is the only game in town.

This is why a principled approach to negotiation produces more positive and longer lasting solutions. Such an approach is predicated on each side recognising the other’s position and accepting basic standards of fairness above interpersonal rivalries in negotiating solutions to problems.

If the ASTI members accept these ‘proposals’ (it’s not a ‘deal’ as the Irish Times on-going biased reporting asserts), the ASTI will be a spent force and teaching in 10 years time will be reduced to nothing more than an instructional-formulaic ‘job’ attractive only because it is the most child-care friendly occupation available.

I am annoyed that the TUI and INTO were party to the discussions. They have no locus standi and should not have been party to the talks between the ASTI and the DES.

It is galling that teachers must pay to get out of S&S as if we were already being paid. We weren’t.

It is particularly galling and lacking in vision that there isn’t a SINGLE statement to even say that pay restoration would/could/will happen. Ideally, a timeline – 2018/2019/2020 would have been nice. BUT here is the reality; pay will NEVER be restored to pre-2011 levels. NEVER. The simple reason is that the population is increasing and the government needs to reduce the per-capita teacher pay-bill on an on-going basis.

It is annoying that there is no statement of when increments will be restored.

I am disappointed that some of the contents are dressed up to look like offers to the ASTI when in fact they are comforts and support to the government.

I am disappointed that there was no move to try and resolve the basis for the dispute which is the adversarial nature of the relationships in education.

I am annoyed that I wasted time and money for this. I cannot support it.

Whenever a judge takes a week or two to issue a judgement, and if that judgement is over 100 pages long, it is often viewed with some mild suspicion. It is as if the volume of reading is designed to hide some uncomfortable truth, specifically, ‘this is what we’d like to happen but all sides are in a bind and it is hard for either to see a way to resolve it so let’s see if I can ramble my way out’.

And so it was with that mindset I first reacted to the volume of material posted on the ASTI website. There is a lot of reading. But most of it was already in the public domain. The ‘Proposal’ is the meat in the sandwich. it’s called…..

Q. Why was the TUI and INTO in there?

I know they are members of the Teacher Conciliation Council (TCC) but they were not party to the dispute (quite the opposite, they cut and run and left the ASTI members to do the heavy lifting).

But on a more serious note (!), being party to the TCC talks, it was clear they would not stand for a deal better than the one they got, at least for fear of looking like fools to their members. So the process was flawed from the get-go.

The introduction says that “These proposals represent the final outcome of discussions and contain the Official Side’s final offer in respect of these matters.” Well, that is the current perspective. I suspect, given the Garda deal, that there are many types of ‘final’.

On S&S, the proposals offer teachers with 15 years experience or more a chance to opt out of S&S but only if they pay €1,769 of their salary. That is, they have to take a pay cut to opt out of something they weren’t paid for in the first place. This is, by definition, unjust. Teachers can also opt-in to S&S but it will only be pensionable if they do it for more than 10 years. But as teachers are not being paid for S&S, how can it be pensionable except by fiddling around with the definition of salary.

There is nothing new in this section. The Ward Report will apply to ASTI members.

There will be a new pay scale. It will take a few years to come in. It will be exactly the same as the TUI scale but different to the pre-2011 pay scale. Here are all the current pay scales and those on offer. 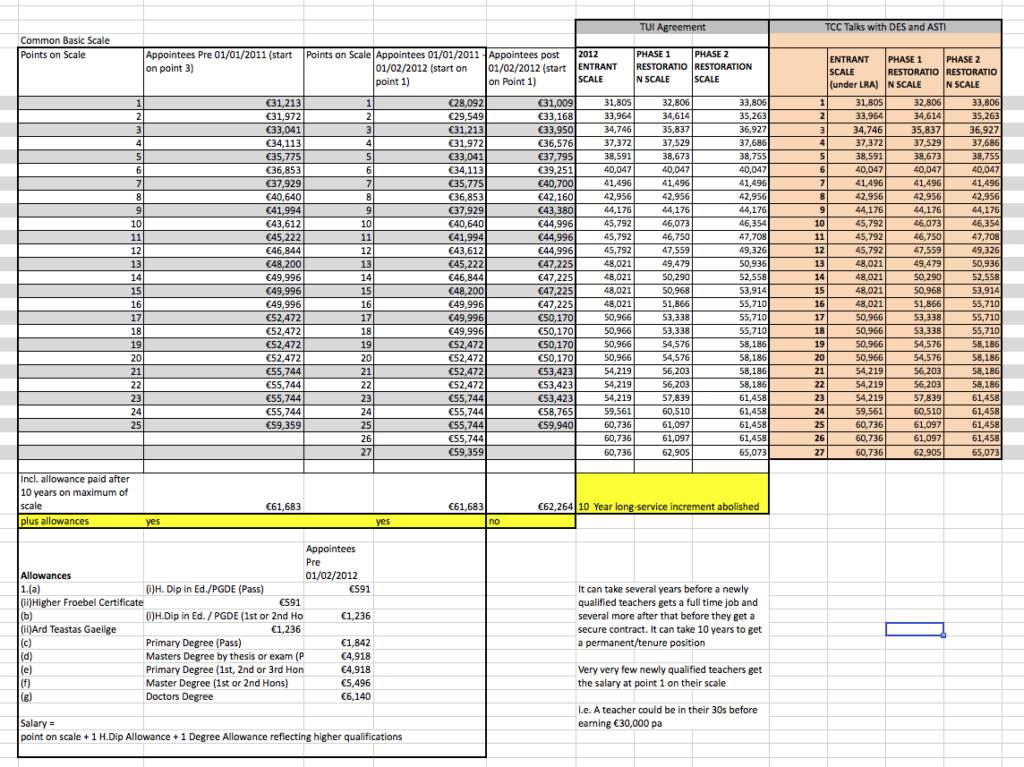 Significantly in this section, it says “It is noted that it is only within the terms of the Lansdowne Road Agreement that any further consideration of remuneration adjustment for any group of public servants, including issues relating to more recently recruited public servants, will fall to be examined.”

I have a major issue with this. Firstly, the world and its granny has accepted that the LRA is dead and talks on replacing it have been brought forward. But the DES seems fixated on ‘sticking the LRA to us’ just because. And the Garda deal is proof of this. The Lansdowne Road Agreement states “there will be no cost­ increasing claims for improvements in pay or conditions of employment by trade unions, Garda and Defence Force associations or employees during the period of the Agreement.” (LRA 4.2.1)

However, for me this is irrelevant with regard to the ASTI. The LRA was not on the table and the dispute, for me, was not about the LRA. It was about the government NOT HONOURING its bargain under the HRA. This, THIS, should have been the first item on the agenda. There should have been a statement that the ASTI had lived up to, honoured and fulfilled its HRA agreement and that the government had not.

I agreed to work S&S FREE for three years in return for a small, miserly payment at the end of it. The money to do this was already budgeted. But the government dishonoured their own imposed agreement and refused to pay this unless the ASTI signed up to their new baby, the LRA. The government broke the contract. They should be held in account for this.

Then to add insult to injury,

“The parties acknowledge that the issue of the pay of January 2011 new entrants to the public service was not resolved in the current process.”

The whole issue of new entrant pay was kicked down to road to the Public Service Pay Commission, a commission which, by the way, has already been compromised by the thoughtless utterings of its chairperson.

There is nothing under this section save the government agenda for posts. It’s not entirely bad. There are some matters of good practice although the concept of ‘open recruitment’ to posts in a small country like Ireland it open to abuse. There is no ‘civil service commision’-type organisation to ensure that meritocracy means meritocracy and in practice, school principals will find a way to appoint whomever they like to posts.

Review of Usage of the Croke Park Hours

There will be a review of these. Schools can allow up to 8 hours (versus 5 previously) for non-whole school use (increasing to 10). It will still be done for free.

Partial absence on a day will not be recorded as a full-day. I suppose this is something.

There is some stuff on teacher wellbeing to puff out the proposals.

Nothing here of significance.

Nothing here except that which gets the government off the hook for the 10% assessment in English.

All the ‘offers’ of re-running Junior Cycle CPD is what the DES would have to do at whatever time the ASTI sign up to the Junior Cycle. So the ‘offers’ in this section serve the the DES, not the ASTI.

A separate document ‘Junior Cycle Statement of Assurances 29 November 2016 outlines the assurances to the ASTI on the Junior Cycle which I am sure must also be reassuring to the DES.

Needless to say, the flawed nature of this Junior Cycle reform means that I could pick it apart but I’m too annoyed to do it now. Just get a look at the sample English examination paper and you’ll get the idea.

One thought on “If You Take Off Your Earphones, You’ll Hear The DES Laughing At You.”