I’m not an epidemiologist but let me make some wild unfounded claims like everyone else. This is not the flu or even a flu; it is a virus for sure. But it would be foolish to assume that this thing will completely disappear a. when the summer comes or b. when we’ve flattened the curve. Already in Wuhan, people are being asked to stay indoors in order to prevent a second outbreak.

However, flattening the curve will help manage scarce hospital resources, and the summer may help reduce the spread of infection in a manner similar to the way flu viruses abate during the summer.

But who knows. This is new, uncharted territory. The most we can do is be sensible, and as Douglas Adams says in The Hitchhikers Guide, don’t panic.

“But the Leaving Certificate is my whole life and I have to get my college place”. Yes Virginia, and you know, that is a perfectly understandable feeling. But as teachers often tell students, at least for their mental health if anything, not getting your first place, or even not getting into college, is not the end of the world. There are other avenues and routes to your goals and dreams. That is little consolation on an individual and national level, and to the government which needs to make sure the universities can enrol a cohort next academic year. So, other avenues notwithstanding, if you intend to go to university, my money is on you going to university, by, eh, hook or by crook. (what is it with a Fine Gael government, which is destroying geography in schools, but continually uses and relies on geography and geographical terms, eh?). I digress….

One interesting thing this contagion seems to have thrown up is that – despite all the hullabaloo every.single.year about the Annual Great National Quiz – every student actually wants to sit the exam and get their points and get their place.

And so there is currently a scramble in the media and online to suggest solutions, most of it from non-educators and non-teachers, making all sorts of unfounded and wild claims and/or drawing on comparisons with this country or that country. Here, and here and here for example.

Comparisons with other jurisdictions are pointless. Besides all the negatives of using predicted grades – from teacher bias to the more problematic, systemic bias evidenced in teachers’ lower expectations of children from disadvantaged backgrounds, the Irish education system is not set up to produce a consistent assessment profile of students’ achievement and attainment over time.

Firstly, notwithstanding all of the complaints regarding the CBAs (here, and here for example), they are simply not fit for purpose in determining student attainment. The recent publication of the the Geography sample CBA products, for example – which were meant to be representative of the national cohort – came from one teacher, done with one class, and in one school. There are related-issues with other subject CBAs. So the CBAs do not stack up as a statistically valid and reliable means of assessing students.

Secondly, continuous assessment, which teachers have practiced long before the current round of so-called ‘reforms’ – was/is never intended to be a summative (final grade) approach to student attainment. Continuous assessment is used to encourage, cajole, push students to achieve better; the grades and comments are designed to encourage the faint-hearted or strike the fear of God in the lackadaisical. They are never intended to be used in any other manner. Suggesting that predicted grades (whatever proponents think that is) could be validated against whatever CA material teachers have, is to fail to appreciate the nuances of the job that teachers do.

And just for emphasis, proponents here seem to think they are used in the UK to allocate college places. It’s not that simple. The UK governments’ suggestion for this year is that they would be used amongst other measures. So they are not being used *exclusively* in the UK as among other things, “simply using predicted grades would not be fair to all students”

The hardest decision the government has to make in this crisis is what to do with the State exams. We can throw money at everything else, but no amount of money can solve the issue of valid college admission. It’s a pity there has been such little leadership on the education front, and when it came, welcome at the time, but ultimately poor.

Even between the Mocks (which many (but not all) schools hold in February), and June, students’ cognitive development and learning comes on in leaps and bounds. Predicted grades and mock exams cannot take account of the effect of the aforementioned encouragement of the faint-hearted nor the kicking-dragging-and-screaming of the lackadaisical.

Already some unfairness has been injected into the equation with the awarding of full marks of practical and oral work, but not project work. Because of this, I think the State exams should be cancelled. The Leaving Certificate examination cannot maintain its legendary integrity this year. So, let’s assume for the purposes of this rant that the Leaving Certificate was to be cancelled. What are the options. I think there are only two.

This is problematic because a. the government would have to pass legislation to prevent a torrent of law suits (due to the problems with this method) and b. invariably there will be students who get places who just aren’t yet able  to succeed on a course because they lack the academic ability – an ability which is usually decided by the State exams. We would need to anticipate a lot of course-hopping the following year, so the problem would just get kicked down the road with all the attendant problems that would create.

I think a more realistic approach is to allocate places on the basis of general ability. This would involve students sitting a Scholastic Aptitude Test.

Obviously there are certain assumptions here. The test could not be done online if fairness was to be maintained. It would have to be held in schools. To do such a test in schools, we would need to be able to have some social contact. If at all realistic, this would have to be towards the end of July or early August, when the virus has possibly subsided (fingers crossed anyway).

In one Twitter exchange, it was suggested that it would not be fair to have students sit such a test because they wouldn’t ‘have studied’ for it and their teachers won’t have been able to prepare them for it. Actually, not being ‘prepped’ for a test is a more sure test of attainment, but ignoring that, two thirds (or more) of every student in the country has already done at least one SAT-like test – the CAT4. Sample report here plus see image for ‘prediction’. Not having studied for it is not an issue because it is a test of general ability rather than subject-specific ability. 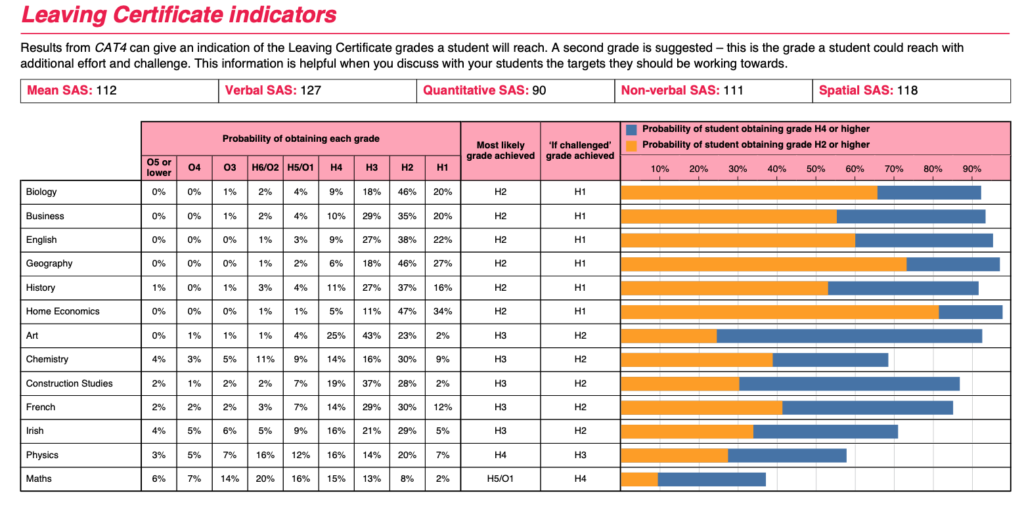 Even if students are ‘cautious-worried’ about the familiarity issue, none seem to report it when taking the CAT4. The training to actually write the answers is given as part of the test. So not being prepped by a teacher is not an issue either.

Should the CAT4 that students have already done be used for a predicted grade?

No. Students typically do a CAT4 in TY or 5th Year. As you can see from the image, there is a prediction on how students *might* do if challenged. But such challenge is not guaranteed. The point is that over the two years between taking the CAT4 and the LC, students will have developed cognitively even if not challenged in school; and if challenged but not responding in school, they will still have developed cognitively. Every little bit of learning helps.

What about all the subject learning that students have done? It will just go to waste.

Well, we’ve been telling students for years now that the learning is more important than the final exam. The final exam cannot be the purpose of learning. That’s a whole other debate. I’m saving it up for the upcoming fiasco that will be Senior Cycle Reform (yes, that’s another prediction right there folks!).

No learning ever goes ‘to waste’. And yes, it would be nice to have a test at the end of all that learning. It brings no small amount of joy to hear students say that.

When I asked one of my students if they would still study if the LC was cancelled.

I asked if the exam was the only reason for studying.

I asked, if you knew coming in to school in first year that there was going to be no LC exam, would you study?

I asked, if everyone did that, what sort of country would we have?

My student, very honestly, and graciously, got the point.

The exam is not the point of the learning. Even now, all the learning students do remotely, outside school is vitally important to their development.

Notwithstanding that, the learning a student does can help with a CAT4-like test. So the learning is never going ‘to waste’.

And yet that said, there are SATs that test general subject-specific knowledge and there is no reason why this could not be included in a general cognitive abilities test.

The key advantage of a CAT or SAT is that they can be processed and graded more quickly than the Leaving Certificate. So if they were administered in August (+/-), students could still start third level by the end of September (+/-).

Absolutely not. I think that would be a disaster. But for those who know the issues surrounding giftedness and IQ testing, we would of course have to make adjustments for students with specific learning difficulties. We would still need scribes and readers. And this is important from a fairness perspective.

A CAT4 test can be administered quickly, answers processed by computer and scores generated quickly. These scores could then be used to allocate places. They would be fair, unbiased, free from grind-school effects (students can practice question types but not the specific questions as with the LC), they are easily administered, can be done over one or two days and will give a solid basis on which to allocate college places.