Home » Blog » EdTech » Does Not Compute!

In 1983 a friend of mine acquired a Sinclair ZX Spectrum, the gift of his father.  He got a 48K model and some ‘peripherals’ as well. ‘Peripherals’ was a new word to us and we used to play around with its pronunciation, such was our fascination with it. Even more fascinating was the ‘add-ons’ themselves (of course, ‘add-ons’ as a word didn’t exist, to our knowledge).
He got a tape-recorder. You didn’t need a Sinclair model – any would do.  The tape recorder could be used to ‘save’ programs written in code or to ‘load’ shop-purchased software. There was a great computer store on the Parnell Street end of the ILac Centre we used to visit. It had probably the biggest range of tape-format computer programs in Ireland.

The real jewel however, was the Sinclair Spectrum thermal printer.  This neat, little black box printed on foil paper.  What a wonder it was to our teenage eyes. We had used a dot matrix printer in school but the foil printer was a futuristic, hi-tech machine that made us feel part of a Brave New World. Unfortunately the Staid Old World wasn’t quite ready for what we wanted to throw at it.
With the computer, the tape recorder and a rudimentary knowledge of BASIC, we began to write programs. Our first thoughts of programming however, wasn’t to write games. That came later. What we wanted to do was find an efficient way to do our homework – probably the one thing that dominated our life more than anything else. The ‘computing’ bit of ‘computers’ pointed us in the direction of our Maths homework. On coming up with this idea, we were quite excited with the anticipation of our Maths teacher’s reaction to our homework (the total nerddom of it all!).  So we wrote some code in BASIC for the minus B formula, length of a line and a few others. Then we ‘inputed’ our Maths homework and printed off the answers on the foil paper and brought them into school.
We went to class, trying to feel as normal as possible while holding the giddy knowledge that we had done something that we knew was very clever. Then our Maths teacher came to check our homework. We took out the silver foil ‘printouts’ and showed them to her.  She paused for a moment.  This was clearly ‘a first’ and as expected, she wasn’t be quite sure how to react. She challenged us with a friendly “no no no”.
“What miss?”, we replied in unison.
“ You can’t be doing your homework on a computer. That’s cheating’.
We agreed.  But we explained;
“miss, it is if we just copy it, but we had to write the program to make the calculation”.
“So”, she said.
“ Well Miss, to write the program we had to understand completely how the equations worked”. 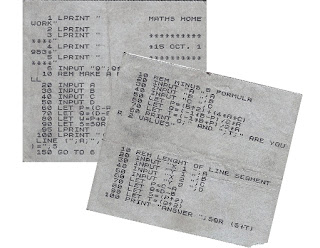 We promised to bring in a printout of the program to prove we wrote the program. She kept the printed answers. The printouts of the programs are opposite.
After that however, we had to have written-out homework. Once was enough it seemed. I kept the printouts over the years and recently rediscovered them.  My friend unfortunately passed away shortly after turning 21. He had a fantastic collection of programs he wrote himself, all recorded on tapes long since lost.
What was striking about the homework episode was that a. we were not alone -there was other students in  schools doing the same thing – though we didn’t think that far at the time;  and b. the education system had nothing to foster our interest and (even meager) ability in programming.
Steve Wozniak differed in opinion about how the budding computer industry should evolve. Wozniak belonged to a group of enthusiasts who hoped to spread the good news of the joy of programming.  But Steve Jobs and Bill Gates knew they had to produce machines that would appeal to a greatest number of people and that this necessarily meant making machines that could be used without programming knowledge. Arguably, this set back the Knowledge/Information/Computer Society by 30 years.
However, it is possible that had a ‘programmers-only’ industry developed, we would not be where we are now.  Where are we?  Ironically, there is an increasing appreciation the importance of having some knowledge of code and that those with lots of knowledge are well placed to take advantage of the developing Information Economy. The computer industry may be going full-circle back to its origins, at least in part.
But we need to schools to go there too. The negatives of the experience of my friend and I was not that we were questioned about doing our homework on computer, but that the teacher wasn’t in a position to appreciate that it took a higher level of skillto produce our homework using a program we wrote ourselves. We understood why so it was okay. Then.
Today there is a greater awareness that computers maybe a medium by which students produce work. But it is not enough for teachers to understand or accept this. Teachers need to be trained to be able to instruct those students who need the knowledge to use computers, generally and in their subject, and to encourage more progress in those already using them. Does this mean teachers should become coders? I couldn’t say this. But the more knowledgeable is a teacher about computers, and Web 2.0 & 3.0 and how to integrate it in teaching and learning activities, the better we can prepare students for a future world.
It is easy to look back and tut tut our experience. This would be wrong. Most Irish schools had only just got their Apple IIe (complete with 5 inch floppy Drives). What should be tut-tutted is that so little progress was made between the 1980s and now. Fair enough that mass computer ownership really only took off in the 1990’s with the widespread availability of the internet. But so much more could have been done had teachers been trained to use computers. Computer training should be obligatory on all PDE courses. It’s not yet. But it can’t be far away.
caveats: 1. ICT is only one tool a teacher can use among many valuable tools. 2. Not all school-leavers will enter a computer-dominated work environment.