Home » Blog » EdTech » Tablets in the Classroom: Towards a New Pedagogy

I want to begin a conversation on the use of tablets in the classroom.
I think we are approaching a tipping point in Ireland where schools see that there is much to be gained from introducing Tablets into the classroom and that in the next year or two, most schools will either be considering the move or actively engaged in it.
Of course there are barriers to adoption, not least economic disadvantage and the general state of the economy. But I think the means to overcome these can be found once tablet use in the classroom becomes an ‘ICT entitlement’ – which it should.
I want to present a few thoughts on classroom pedagogy and where I think it needs to go as Tablet use become the norm.  I’m specifically referring to tablets rather than the catch all ‘mobile devices’. I know there are different opinions on form factor but that debate is not my purpose here.
I always only ever viewed ICT as just one tool among many. My views have changed. It is still one tool among many but it needs also to move closer to the core of childrens’ school experience in the form of specific ICT courses.
ICT as a standalone subject

“although they were in favour of ECDL and the integration of ICT into existing subjects”.

One member of the NCCA group (also a school principal) was very concerned that a computer-based subject would be “elitist”.
Some issues raised included concern that

The notion that we should not provide an ICT course because it might be elitist and only for the high flyers is first a misunderstanding of the level at which ICT can be accessed but also a condemnation of the right a child who is interested and capable to access ICT and an education appropriate to their needs.  Are we to say to a child – “You can’t have ICT because you are a high flyer and Jonny over there isn’t and if he can’t have it, you cant either?”
Another principal said

“I cannot see ICT as a subject that would rank with core subjects such as languages, maths, physics and biological sciences”.

I accept some of the fears mentioned in the report. School should not be specifically about producing worker bees.  Yes, we want children to be equipped to meet the challenges of the 21st century and yes, this includes the world of work but the principal who said that he “could not see ICT rank with core subjects such as Physics and Languages” missed the point. It is not a case of either/or. It can be a case of both. In fact it has to be.
2001 was a very different time and many of the comments are understandable views for the time.  Today, I would like to think that thinking has changed but I fear they may not have.
I’m happy to admit to some bias but I believe there should be a core curriculum at Lower Second Level – a minimum set of skills and knowledge that all students should learn in their school career. In my humble opinion, it simply beggars belief that the new Junior Cycle Framework did not introduce a compulsory ICT subject.  I know ‘compulsory’ is not the most attractive word but in a world where even ‘unskilled manual workers’ need computer skills, it makes no sense to be turning out students who haven’t learned, in a structured and systematic way, to use computers.
I believe that our approach to ICT in education has been piecemeal and at times, more focused on photo-shoots for Ministers rather than focused on  adopting a cohesive, planned and executed programme of training and adoption.  To be sure training is available thanks to the NCTE. But it is voluntary and several modules do not always make for a structured qualification (formal or informal) in the use of ICT.
ICT as a standalone subject, at basic and advanced levels to suit interest, should be a required course in Lower Second Level education.
ICT embedded in classroom teaching

The question to be answered by the opportunity presented by tablets is how do we go about delivering our aims for education i.e. what should pedagogy look like in the classroom where tablets are the norm?.
A 2001 Report OECD/CERI ICT PROGRAMME on ICT and School Improvement (2) concluded that

“The dominance of the expository paradigm of teaching and learning, particularly at post- primary, represents a major barrier to the successful integration of ICT into teaching and learning in the Irish situation. Unless this issue is addressed, it is unlikely that the meaningful integration of ICT into learning will occur and ICT use may be mainly confined to computer applications, some project work for non-examination classes, some use with SEN students and improving the quality of teachers’ classroom presentations.”

“the dominant paradigms of teaching, learning and assessment must be questioned and schools must begin to operate as dynamic, organic wholes rather than as fragmented institutions if ICT is to realize its potential for the promotion of teaching and learning In Ireland.

If we don’t change the paradigm, we cannot satisfactorily equip our children for the (rest of the ) 21st century. So we need to move away from the ‘Ferris Bueller’ model of education to, well,  the ‘Working Girl’ model crossed with the idea of the Platonic Academy.


A catch phrase oft repeated today is ‘we need to teach children how to learn’. Do we? Children already know how to learn before they start school. But we do a very effective job of burying that ability under the weight of repetitive joining-the-dots and colouring inside the lines.  I can see value in these things but we need to find ways to retain the natural inclination of children to explore and learn.

Sugata Mitra’s Hole in the Wall experiment illustrates brilliantly what children can do with the right tools. Of course there is learning that requires teachers, but we should know when to get involved and when to step back as children learn.
So how do we use Tablets in the classroom?
Recently on #edchatie (3) there was a chat about the use of eBooks in the classroom. And while the Irish offerings aren’t yet up to the vision offered by Apple iAuthor, they will improve gradually. eBooks have plenty of merit, but I believe that this is the wrong way to go.  For me, other than the weight saving, I think eBooks represent a poor use tablets.  As Daniel Hyland justifiably points outs, eBooks can bridge the jump from paper textbooks to more technological approaches, especially for teachers who are not as comfortable with technology as others.

That is why when it comes to learning using tablets we need a new pedagogy. I don’t want my students to just read a chapter on Tourism in Ireland and then answer comprehension questions (although that is important). I want them to add to the chapter themselves. I want them to source data, construct interpretations of it (graphs, charts, maps, analyses) and write their own report on what they have learned. To do this, they do not need more than an eBook. All they need is a tablet and the internet.

I want stiudents to be able to learn at their pace. Tablets facilitate this. They give every child access to ICT as a level they can handle.  A major buzz word in education nowadays is ‘differentiation’. But I’m with Phil Beadle on this – it’s nice in theory but it’s just not realistic. Tablets solve this problem. They are a one-stop shop for personalized learning.

But there is a problem with this idea that is not so easy to address. We want children to leave school with 21st Century skills but there are many teachers who do not have these skills themselves.  Teachers need to become expert in them.

In fact I think the whole model of Teacher Training needs to change so that a teacher can walk into a class and be immediately be comfortable with not being the centre of attention. We still need teachers who are subject matter experts but they must also have 21st century skills themselves so that they can teach them to children and then mediate what children produce as a result of this.

In ‘Why do I need a teacher when I’ve got Google’ (4) Ian Gilbert says the answer depends on how good a teacher you are.

He goes on  to say (I’m paraphrasing)

“add in your powerful role in helping them develop their communication skills, creativity, curiosity, team work, confidence, self-esteem, sense of right and wrong, ability to deal with adversity, and citizenship then you have a powerful role for the 21st century teacher”.

How much of these are available on a PDE course?  Undoubtedly there are bits and bobs, but if our focus is on producing ‘academic teachers’ rather than ‘pedagogic teachers’ we can’t hope to maximize the benefit of new technologies.

Teachers need to be expert in ICT in education. They need to be able to teach students how to ask the right questions to find the right information and how to then evaluate this and use it to produce new knowledge. Google’s recent announcement of Google Search Education should be on every teachers ‘to do’ list.  This resource includes Lesson Plans and training on 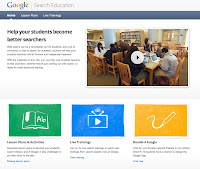 This could very usefully form a module in teacher training.


The NCCA ICT Framework (5) revised in 2007 offers a structure that should be systematically in-serviced so that all teachers can establish these learning outcomes for students.
So the new classroom pedagogy would see the teacher step back from imparting knowledge from the top of the classroom. Instead, children would be taught internet search skills, critical thinking, problem solving and decision making, communication and presentation skills among others.  Teachers would mediate student learning enabling them to create new knowledge either collaboratively or independently and enabling them to acquire meaning from their learning.

In Working Girl, Melanie Griffiths boss Sigourney Weaver – who is always stealing her ideas – goes on holiday. Griffith’s character gets an idea from reading a variety of magazines and develops strategy to execute a merger. She does this with Harrison Ford, Weaver’s partner. When Weaver returns, she discovers Griffth’s deal and storms into the merger meeting to accuse Griffith’s of stealing her idea. Griffith’s has no come back, because afterall, she is ‘only’ a secretary. However, in the end, Griffith’s get to reveal how she came up with the idea – by finding several different sources of information, coming up with a creative plan, synthesizing the information into a saleable package and then arranging all the details. Imagine what she would have been like in a classroom with a tablet?!

The Platonic Academy was a place where dialogue could occur between two or more people, each holding different points of view about a subject.  Dialogue was a process of uncovering the truth. It was not debate, where one party tries to win an argument but rather an attempt to discover the truth of a matter by an exchange of ideas.

The combination of tablet-enabled independent learning and collaborative learning mediated and nurtured by a teacher expert in 21st century skills is a powerful model of the use of tablets in the classroom. Contribute to the discussion on #21CT

One thought on “Tablets in the Classroom: Towards a New Pedagogy”