It is easy to forget the huge amount of work that has gone into thinking up and developing the Replacement Junior Cycle (I just can’t bring myself to call it ‘reform’).

But huge work has gone into reducing all the knowledge in the world to 24 Statements of Learning. This is everything a child needs to know to do whatever it is they have to do to get the thing that they’re getting at the end of three years of schooling (I just can’t bring myself to call it ‘education’). 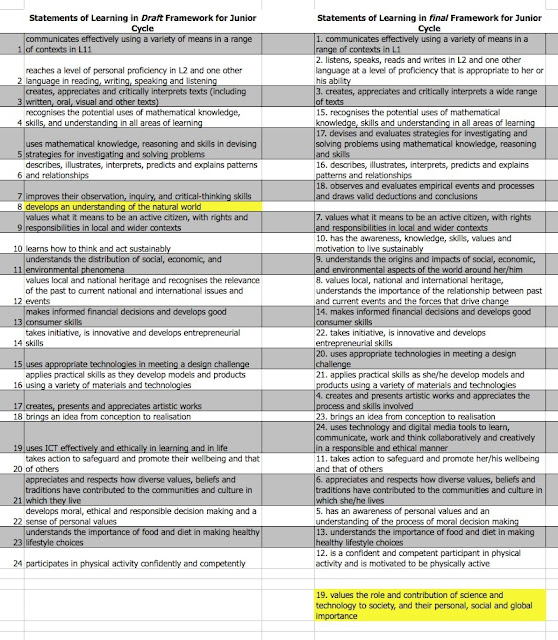 For me, the most obvious change was the removal of Statement 8 in the original;

8. develops an understanding of the natural world

For statement 8 you can read ‘Geography’. Now, while Statement 9 in the final Framework is similar to, and itself a slight re-wording of Statement 11 in the original, it is hard to believe that the presence of 8 and 11 in the original was a mere duplication by the NCCA – notwithstanding clear differences between them.

Therefore it is hard not to conclude, given several newspaper articles and ‘letters to the editor‘, that someone has it in for geography.

This is not the only, ahem, conspiracy theory surrounding the Junior Cycle Rewhatever you’re having yourself. (You might note, as an aside, that every conspiracy theory is only that until the truth comes/pops/gets dragged out and then we call it politics or something else with ‘best interests of the people’ tagged on the end followed by some pithy statement about having relied on the best advice of ‘the experts’ (who are they?) at the time).

So what has Statement 8 been replaced by? In the final Framework,

19. values the role and contribution of science and technology to society, and their personal, social and global importance.

As I mentioned elsewhere, it was simply beyond belief that Science and ICT (of some sort) was not made compulsory in the shiny, new, Replacement Junior Cycle. Clearly someone in the NCCA goofed up. There is no other way to say it. And clearly they (or the DES) were open to being lobbied to ensure the change was made to include this new Statement.

It certainly can’t have been an oversight, as in “Ah sure Mick, look what ye did, ye only went and left out the ‘values role and contribution of science and technology to society, and their personal, social and global importance’ Statement. Quick, slip it back in there before anyone sees us”.

The apparent ad hoc-ness of this has to call into question the process and thinking behind the Replacement Junior Cycle.

Certainly (and yes, I know I’m biased, what’s your point?) removing geography the core curriculum demonstrates an serious lapse in either awareness or judgement or both. And removing history from the core highlights this as our policy makers and planners forget the lessons of history.

2 thoughts on “NCCA and the Amazing Statements of Learning”