So, I wrote to Ed Byrne, President of the ASTI, during the week of the latest ballot. It was my first snail mail in rather a long time but then I thought it was worth the effort.

Nearly two weeks on, I have no reply still. It goes like this;

Re: Outcome of Talks with the Teachers’ Conciliation Council

Many thanks for all your work on behalf of the membership of the ASTI. It can’t be easy given the times we are in. 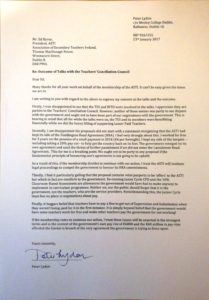 I am writing to you with regard to the above to express my concern at the talks and the outcome.

Firstly, I was disappointed to see that the TUI and INTO were involved in the talks. I appreciate they are parties to the Teachers’ Conciliation Council. However, neither of those unions were party to our dispute with the government and ought not to have been part of our negotiations with the government. It should be borne mind that while the talks were taking place, the TUI and its members were benefitting financially while we did the heavy lifting of supporting Lesser Paid Teachers.

Secondly, I am disappointed the proposals did not start with a statement recognising that the ASTI kept its side of the Haddington Road Agreement (HRA). I feel very strongly about this. I worked for free for 3 years on the promise of a small payment in 2016 (€6 per fortnight). I kept my side of the bargain – including taking a 20% pay cut – to help get the country back on its feet. The government reneged on its own agreement and used the threat of further punishment if we did not enter the Lansdowne Road Agreement. This for me is a breaking point. We ought not to be party to any proposal if the fundamental principle of honouring one’s agreements is not going to be upheld.

As a result of this, if the membership decides to continue with our action, I trust the ASTI will institute legal proceedings to compel the government to honour its HRA commitments.

Thirdly, I find it particularly galling that the proposal contains what purports to be ‘offers’ to the ASTI but which in fact are comforts to the government. Re-running Junior Cycle CPD and the 10% Classroom-Based Assessment are allowances the government would have had to make anyway to implement its curriculum programme. Neither we, nor the public should forget that it is the government, not the teachers, who are the service providers. Notwithstanding this, the Junior Cycle issue has no place in negotiations about pay. 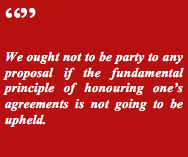 Finally, it beggars belief that teachers have to pay a fine to get out of Supervision and Substitution when they weren’t being paid for it in the first instance. It is simply beyond belief that the government would have some teachers work for free and make other teachers pay the government for not working!

If the membership votes to continue our action, I trust these issues will be asserted in the strongest terms and in the context of the government’s own pay rise of €6000 and the €40 million in pay rises afforded the Gardai in breach of the very agreement the government is trying to force upon teachers.

Of course, there are a few points in between the lines:

There are many voices shouting about loss of public support. But ‘public’ in this context means the Media and the government-financed NPCpp; so we know what that means. The truth is the wider public support (and whose opinion is often based on their own experience of schooling rather than knowledge of teaching and education) is irrelevant if the cause is just. The facts would appear to speak for themselves. When the stakes are this high, there is no room for sitting on the fence or shouting from the sidelines. You either have the courage of your convictions or lie down.

There are many commentators, most of whom earn money from bad news and punditry, criticising the ASTI and complaining about it’s structures and wot not. But no matter how you’d like to cut this, the fact remains that the majority of the membership voted to reject the proposals. Criticism of the ASTI in this context is criticism of the democratic will of the ASTI Membership. You don’t have to like it. But that is how it is. And lest anyone say the margin was narrow, so too was the government’s, and indeed, the constitution on which the State is founded.

What next? That’s anyone guess. The easiest thing to do would be to ignore the government’s bullying, lie down with a good book and and let them walk all over us. Nothing good ever came of taking the easy route. That, more than anything else, would be the death knell of the Union.

I think the first step should be court action. That would certainly clear up who is right and who is wrong. And the ASTI needs to hire professional PR representation. A few experienced negotiators wouldn’t go amiss either.

In the meantime, I await Ed’s reply.